Time is of the essence in fire protection because the sooner a fire hazard is detected, the sooner it can be stopped or prevented.

Conventional fire detectors such as smoke detectors, line detectors, or smoke aspiration systems only react to smoke/fumes. Sprinklers require heat at the sensor location to be triggered. To detect a fire in 12 m high warehouses, for example, often requires the fire to already be extensive. The same applies to flame detectors, which only react to flames.

It is better not to allow a fire to break out in the first place. This is precisely where infrared early fire detection comes in. It “sees” material surface temperatures that are too hot long before they cause smoke or flames. By detecting a potential fire early and immediately reporting it to the fire services via an FACP, no time in which a fire can escalate and become uncontrollable is lost.

When IR detection can also directly control immediate targeted extinguishing, a fire can be extinguished in its early stages. 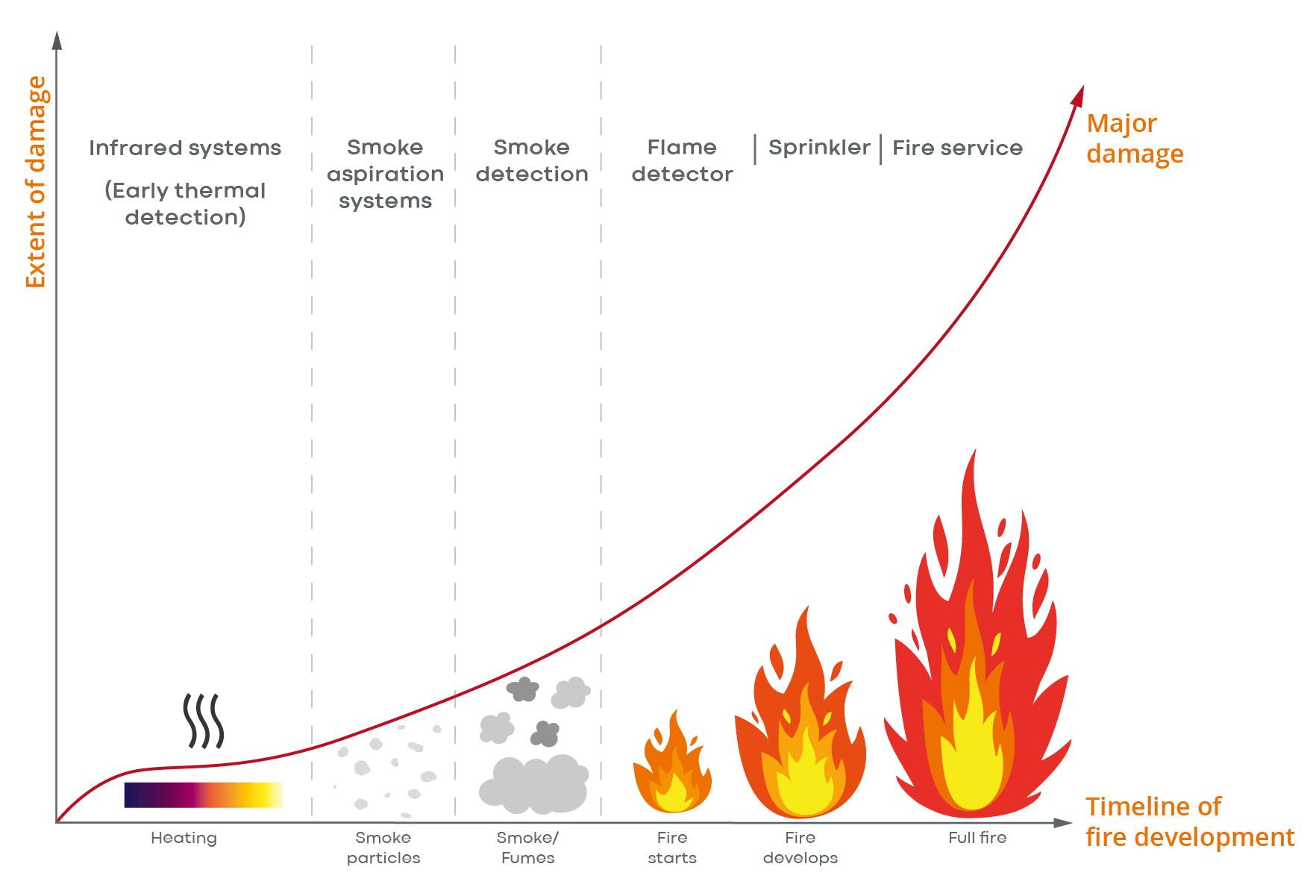 Infrared early fire detection systems detect the heat of developing fires long before smoke or flames appear. The earlier a fire hazard is detected, the sooner it can be stopped or hindered (fire prevention).

PYROsmart® intelligent IR early fire detection uses different types of sensors depending on the version. A high-resolution infrared camera (“thermal imaging camera”) operates in the PYROsmart® FS pro in combination with a video camera and a specially developed pan/tilt system.

PYROsmart®’s special features include intelligent algorithms that can differentiate between, for example, a hot exhaust pipe, which quickly reaches a temperature of 450°C, and a possible fire source of only 85°C.

This key feature saves time in the process of fire detection. It ultimately ensures prevention of fires that can lead to major damage to property and personal injury, loss of production, and even the total loss of a business. 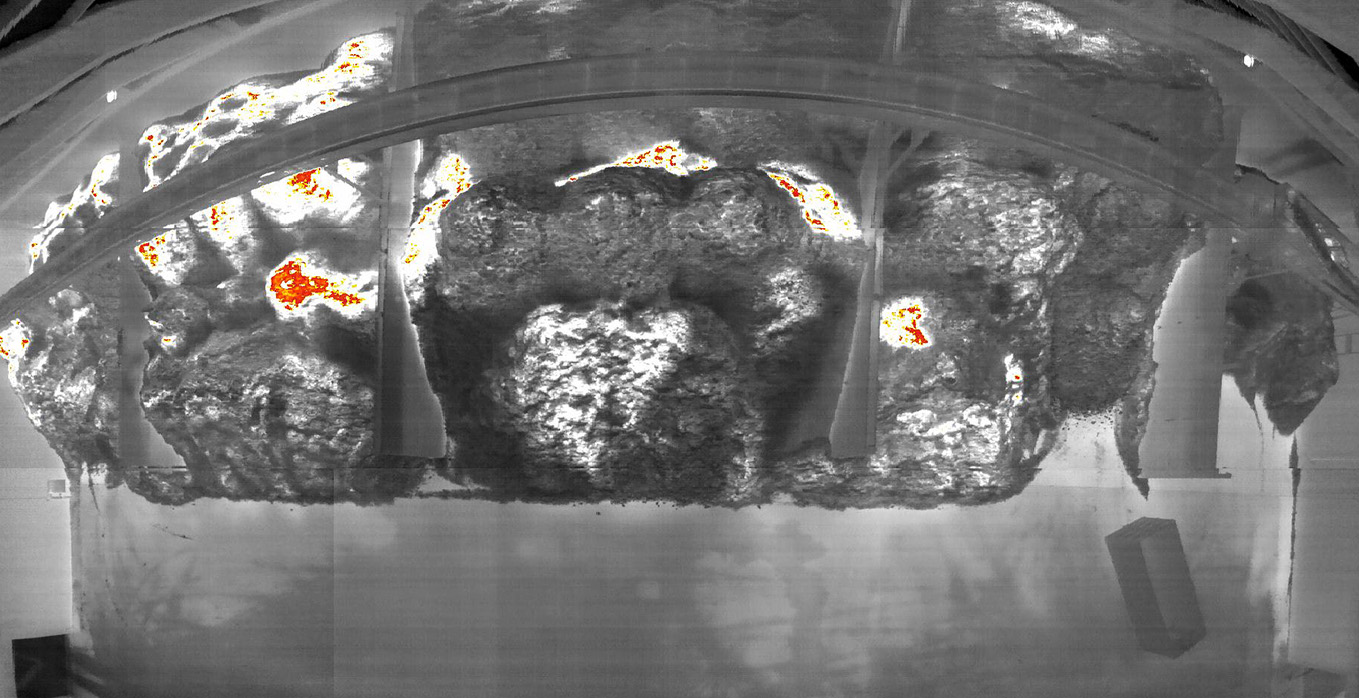 Infrared panoramic thermal imaging from a PYROsmart® in false-color representation. The colored areas are surfaces with increased temperatures. Critical temperatures are instantly “visible” and precisely located. 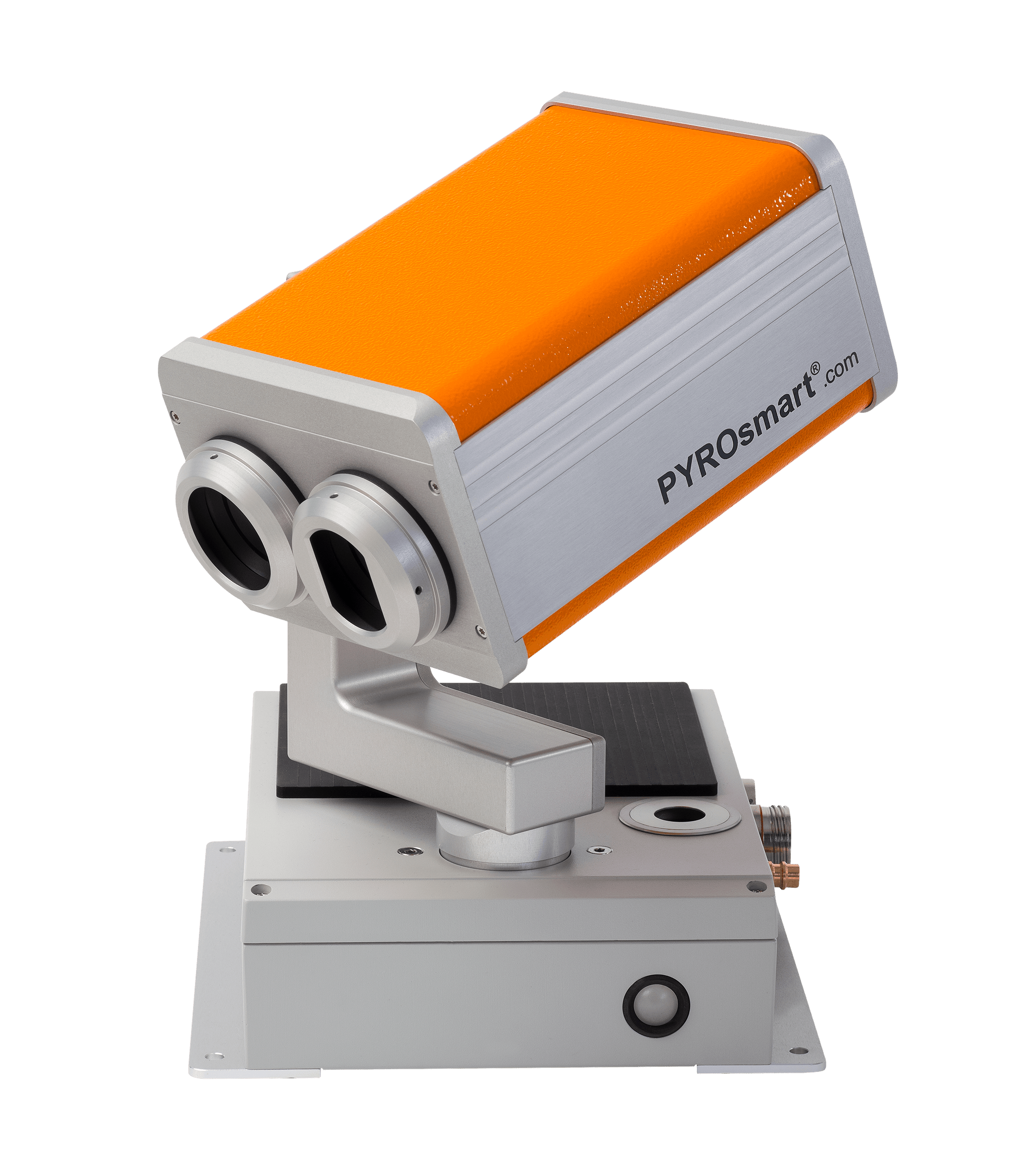 When a critical temperature is detected, its location can be pinpointed immediately and accurately. This is yet another key advantage over all other types of detector equipment.

Precisely locating potential fire hazards is possible because PYROsmart® understands the monitored area’s exact space geometry. No extra sensors are required to do this.

We can therefore claim PYROsmart® to be an intelligent fire prevention system.

How does infrared technology work for fire protection?

Every object emits electromagnetic radiation in the infrared range – known as infrared or thermal radiation. Depending on the temperature of the object, this radiation differs in intensity and spectral distribution. Measuring infrared radiation enables very accurate temperature measurement.

Infrared or thermal imaging cameras use this principle and display the measured temperatures as a false-color image (“thermal image”).

This imaging technique is also known as “thermography” and is used, for example, in the construction industry to assess a building's insulation.

For preventive fire protection, infrared technology provides the option of detecting fires already in their formation phase, whereby temperatures are still below ignition temperatures, but are already conspicuously high compared to the surroundings.

PYROsmart® not only detects fire hazards at an early stage but can also undertake automatic targeted extinguishing in the event of an alarm.

Not every heat source is a hazard

Exhaust pipes, brake discs, engines, etc., are normal, everyday sources of heat. It is therefore essential to clearly assess whether a detected “hotspot” actually poses a threat. Only then can false alarms and operational interruptions be prevented.

PYROsmart® uses a multitude of features and intelligent algorithms to reliably detect and exclude normally high temperatures. Alarms are then only triggered when there is a real reason.

Lower temperature ranges can also be set at which pre-alarms can be reported. Personnel are thereby warned of rising temperatures at the earliest possible stage and can respond accordingly. 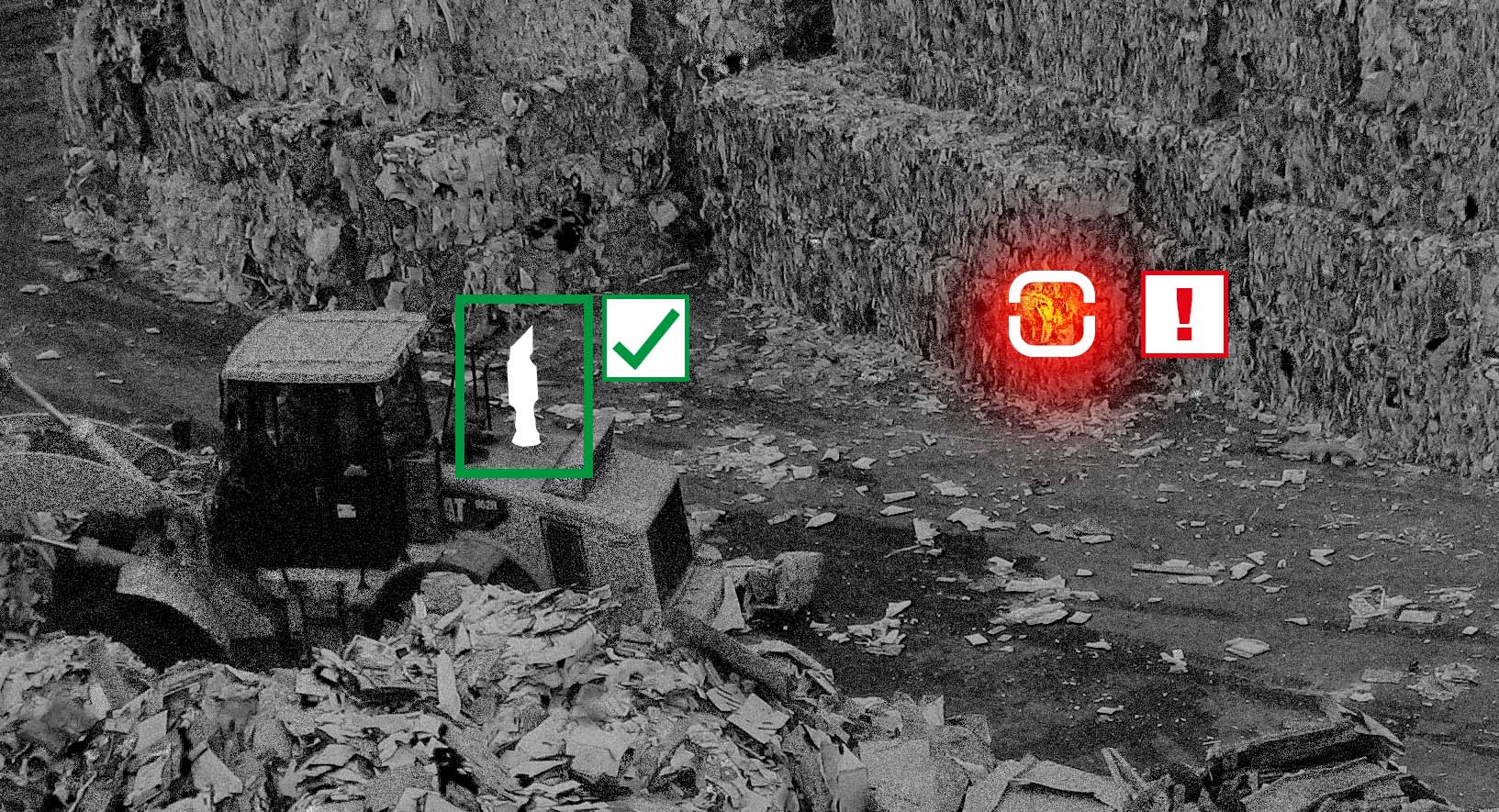 Intelligent detection means that heat sources from loaders, etc., will not trigger alarms (photomontage for illustration).